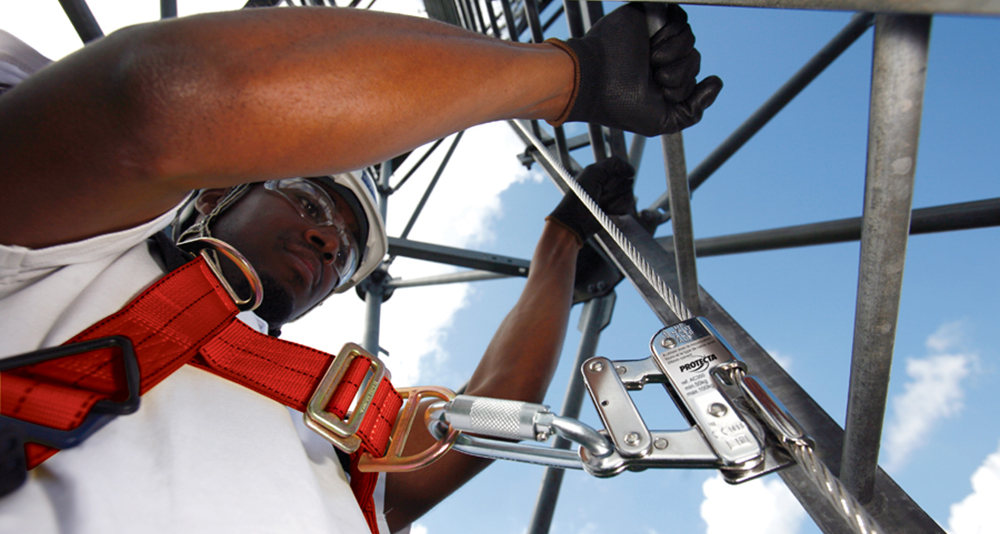 These systems are usually permanently installed onto fixed ladders or may be an integral part of a ladder system.  They are intended to provide an automatic means of fall protection whilst ascending or descending a ladder.

There are 3 main types of Vertical Fall Arrest System available:

There is sometimes confusion over the use of the term ‘Rigid’, but this means that the system is fixed at both the top and bottom, such that it is held in position.  There are other types of vertical fall arrest system, referred to as “Guided Type Fall Arresters Including a Flexible Anchor Line”, which usually comprise a fibre rope fixed to ladder only at the top.  These flexible line systems are usually installed on a temporary basis.  They are also often used horizontally, with horizontal flexible line systems, but this should only be done where the system has been subject to testing specifically for this use which is beyond the scope of the standard.

The design and testing of vertical fall arrest systems is covered in:

Vertical fall arrest systems are often considered as an alternative to cages on ladders and a comparison of these two options is given here:

For existing ladders where it is proposed to install a VFAS a number of issues should be considered:

When a fall is arrested on a VFAS high forces can be generated within the system and these forces must be resisted by the system, its fixings and the substrate.  The main elements to assess will depend on the type of VFAS:

Access and egress at the top of the VFAS is a very important element of the design, as this operation can be complex and require the use both of the climber’s hands.  A well designed system-top will ensure that the climber can remain attached to the VFAS until they are standing on the upper platform and are protected against falls by some other means, such as a gate, before they detach from the VFAS.  However, a poorly designed system will require the climber to try and detach from the system, whilst still on the ladder very close to the top.  Attempting to detach from a VFAS at the top of a ladder, with no other means of fall protection is probably one of the highest risk activities a worker would undertake and would only come about through poor design.  Unfortunately this has been a common design failing for many years.

Users of VFASs should be adequately competent to use them safely.  When these systems have been well designed and installed, they are not complex to use, but all users should have training in their use and demonstrate adequate skills and experience in their operation, or work under supervision while they develop these skills and experience.

As for all work at height there is a legal requirement to plan for emergencies.  Where personal fall arrest systems are to be used, there should be site-based rescue plan in place to recover someone has had a fall arrested.  For VFASs this can be complex and require specialist equipment, which the rescue team will need to competent to use.

VFASs should be inspected before each occasion of use by the user.  They should also have been subject to a formal inspection by a competent person within the last 12 months of being used.

The scope of the inspection should include the condition and operation of the system as well as all of the load bearing elements such as the ladder, brackets, fixings and substrate.